The Ongoing Moment: Recent Acquisitions of Photography at the Loeb

One of the most enduring ideas about photography is that it can capture what photojournalist Henri Cartier-Bresson called “the decisive moment.” This phrase has long been a touchstone for thinking about photographs as moments frozen in time, which create instant visual records of the past. However, Cartier-Bresson also acknowledged that photographs are often carefully considered and composed, and therefore not simply transparent or objective visual evidence. Even when a candid moment is captured on camera, the resulting image becomes layered with associations, symbolism, and misunderstandings. Each photograph is part of a longer, larger narrative—what art historian and critic Geoff Dyer has called “the ongoing moment.” Dyer has traced how similar kinds of images show up again and again in photography throughout history. These repetitions remind us that images become part of shared consciousness and trajectories of collective experience.

Dawoud Bey, Mary Ellen Mark, Carrie Mae Weems, Aaron Turner, and Ray Metzker negotiate the instantaneous and the enduring, the candid and the composed, the present and the past. In their photographs, familiar settings such as city streets or kitchen tables allude to stories that extend far beyond the frame. Cognizant that images made with a camera are constructed and subjective, these photographers demonstrate how photography can extend time rather than freeze it. While the works on view by Bey and Mark come from a documentary tradition, Weems and Turner offer artistic expressions of how the past and present can converge in a single photograph. Metzker’s work is somewhere in between; he played with formal abstraction in picturing the daily bustle of the urban street. For all of these photographers, specific subject matter stands in for broader ideas about history and humanity, and their work presents seemingly familiar images that reward close looking.

These photographs were recently acquired as part of the Loeb Art Center’s permanent collection of photography, along with Ashanti (2005) by Deana Lawson and Riffs on Real Time with Ground (Nightshade) (2018) by Leslie Hewitt. Together these works add to the collection’s deep holdings of contemporary art and documentary photography and strengthen the representation of women and artists of color in the collection. 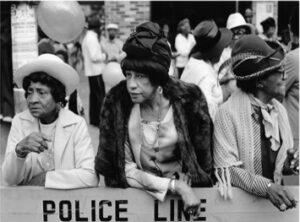 Dawoud Bey was inspired to become a photographer at a young age when he first saw James Van Der Zee’s photographs of Harlem from the 1920s and 1930s. This work is from Bey’s first series, Harlem, USA, which comprises 33 candid images shot with a 35-mm camera on the streets of New York, each depicting Black subjects going about their everyday lives. He aims to enter into a collaboration with his subjects, allowing them to present themselves on their own terms so they can tell their own stories. In this image, three older women appear to be relaxing in the midst of a block party, which can be seen in soft focus in the background. Bey’s talent for capturing the “ongoing moment” lies in his ability to bring forward details like facial expressions, gestures, and clothing, thereby offering the viewer more than just a frozen moment in time. Instead, the image provides a vivid glimpse into the unique character and identity of this lively neighborhood brimming with activity and personality.

Photographer Dawoud Bey’s work grapples with history. The artist asks, “How can one visualize African American history and make that history resonate in the contemporary moment?” Here he discusses several series, sited from Harlem to Birmingham to the Underground Railroad routes of northeastern Ohio, each of which works to make histories visible. From the San Francisco Museum of Modern Art 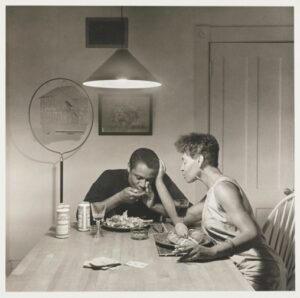 Carrie Mae Weems’s now iconic series, The Kitchen Table, combines narrative and performance to form a commentary on the role women often play as the anchor of the family. While Weems uses herself as a model and therefore plays the protagonist, the series is not self-portraiture. Reflecting on this, Weems stated, “I use my body as a stand-in, but I never think of it as being about me. Rather, the character helps to reveal something that is more complicated about the lives of women.” Weems describes how she sees the woman in the images: “Carrying a tremendous burden, she is a black woman leading me through the trauma of history.” The private domestic space of the home is transformed into a public stage for the everyday dramas and rituals of life to be performed. Scenes such as this one are carefully staged and everyone pictured is acting out a scenario laden with symbolism. Here, the woman plays a supporting, nurturing role—she has not touched her lobster or wine. The man, having consumed all that was offered to him, is the central figure. Eyes closed, bodies touching, the two are lost in an intimate, enigmatic moment.

For more insight into the project, a film from art:21 is available to view HERE with the following synopsis: Filmed in her Syracuse studio, artist Carrie Mae Weems discusses the impetus for her work The Kitchen Table Series (1990), a photographic investigation of a single domestic space in which the artist staged scenes of “the battle around the family” between women and men, friends and lovers, parents and children. 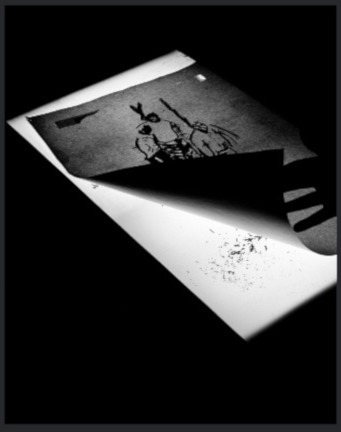 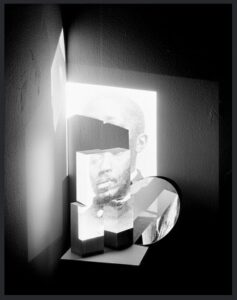 Contemporary artist Aaron Turner creates photographs in which personal and collective histories converge through a combination of representation and abstraction. In his ongoing series Black Alchemy, the contrasting tones of black-and-white photography serve as a visual metaphor for racial disparity in the United States and the struggle to truly represent Black experience. Turner refers to the “alchemy” of photography—a medium in which images are fixed by chemical reactions to light and shadow and the inexplicable magic of chance—as revelatory and transformative. He creates projections of found images in his studio, often partially obscured, reflected, or distorted. Turner then re-photographs these ephemeral installations with a large-format camera, testing the expectation that photographs can adequately represent history. His work wrestles with the painful legacy of Black oppression in the United States, especially his own home in the American South, to imagine an emancipated future.

Turner collects images from personal and public archives as source material for confronting history in the present. Georgia (1892) pictures a tracing of a found photograph of a lynching that Turner made on a light table. The abstracted tracing is both captured and obscured by photography, rendering an image that is deeply painful to look at almost impossible to see. The shadows of the artist’s hand and the charcoal residue remind us that images of the past are both indispensable evidence of history and always mediated many times over. Untitled (looking for self-preservation), by contrast, is a celebratory image of Black American history, honoring the contributions of Black soldiers who fought for the Union Army during the American Civil War. The portrait of one soldier stands in for many abolitionists and soldiers who fought for Black American emancipation—a project that is both historical and ongoing. 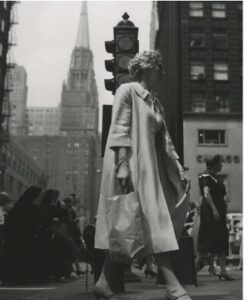 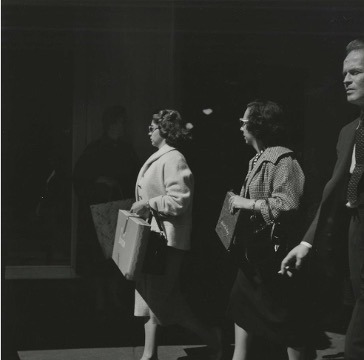 Ray Metzker is best known for his high-contrast, black-and-white photographs of abstracted forms created with light and shadow. He often used experimental techniques, including solarization, multiple exposures on a single negative, and juxtaposition of two or more images printed in sequence. Metzker made these two photographs of downtown Chicago early in his career, while studying photography at the Institute of Design, Chicago. They were part of his master’s thesis project, “My Camera and I in the Loop,” a series that pictured a neighborhood of downtown Chicago, in which he observed “the size, power, wealth of subject matter, and endless changes of light conditions in the Loop,” as he described it. At first glance, these appear to be spontaneous observations of everyday city life, but a closer look reveals Metzker’s careful use of oblique angles, contrasting tones, and rhyming shapes to express the tempo of city life. This series was first exhibited publicly in 1959 at the Art Institute of Chicago. 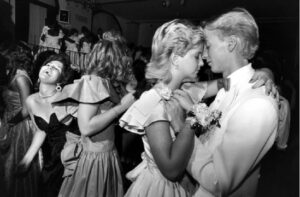 The High School Prom/Couple Dancing Eyes Closed, from Day in the Life of America, 1986

Mary Ellen Mark’s 1986 photograph from a high school prom provides a close-up view of the unfolding drama of the life of a typical teenager. This photograph is part of Mark’s ongoing reflection on growing up in America with an emphasis on the awkward, often-precarious transition into adulthood. She captures a quiet, intimate moment between a pair of teens, in the midst of a crowd of peers. The artist highlights certain details such as the gently closed eyes of her subjects, the shimmering white fabric of the formal wear, and the neatly coiffed hairstyles, to draw the viewer into the scene. In this single frame, Mark presents an array of emotions her subjects might experience from one moment to the next, ranging from the deeply felt connection between youths and the ecstatic freedom of the dance floor. 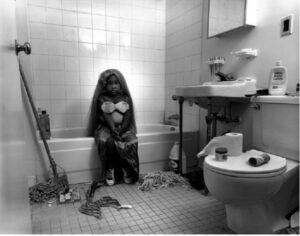 Mary Ellen Mark’s lifelong passion was to give visibility to individual human dramas. She was particularly interested in children, for their sense of imagination, and in overlooked subjects living outside of mainstream society. In the early 1990s, she worked closely with a homeless shelter that offered private apartments to families in need. For this image, she a chose young girl named Diamond Settles as her subject and captured her sitting on the edge of a bathtub at home, dressed as a mermaid in the aftermath of a Halloween party where she was terrified by ghosts, witches, and other sinister-looking costumes. Diamond’s face reveals the complex, confusing emotions of childhood while her costume, instead of transporting her into a fantasy world, blends with the dingy interior, pointing our attention to the absurdity and misery of the scene.