Over the past two decades, police violence against Black Americans has become newly visible through the instantaneous circulation of digital photography and video online. Black American writer Elizabeth Alexander recently deemed those who have come of age in this period, “the Trayvon generation.” Alexander writes: “Black creativity emerges from long lines of innovative responses to the death and violence that plague our communities.”

This exhibition centers the tension between visibility and invisibility, inherent to the medium of photography, through works by Black American artists. Throughout its history, photography has held the powerful promise of making the world more visible. Lived experiences—both individual and collective—are often represented by the visibility of human figures. Visual representation can affirm a person’s very existence. Yet photography has also been a powerful tool for selective memory and erasure, reinforcing hierarchies between White photographers and Black subjects. The camera lens frames the view of a single individual, which becomes fixed within the arbitrary dimensions of photographic paper. When we look at a photograph, we may be struck as much by what or whom is excluded from its frame as by what appears within it. 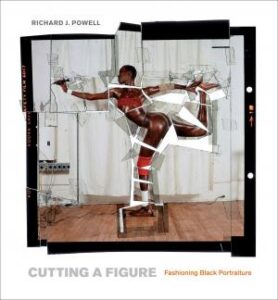 Contemporary Black artists have used the conventions of photographic portraiture to call attention to mainstream refusals of Black humanity and opportunity in the United States. The works on view exemplify artists’ creative uses of photography to resist colonization, inequity, disenfranchisement, and brutality. Following art historian Richard J. Powell’s study, Cutting a Figure: Fashioning Black Portraiture (2009), this exhibition considers the unique agency of Black portraiture. Both artists and subjects have engaged with photography as a performative medium in which identity is constructed and negotiated, rather than assigned and fixed. In doing so, they insist on the visibility of Blackness, thereby attesting to race as a central issue of lens-based representation.

Although Black photographers have long existed, they have been vastly underrepresented in North American photojournalism, art schools, and commercial studios. Consequently, they have too often been excluded from established histories and museum collections of photography. The photographs on view are part of the Loeb Art Center’s permanent collection, but our holdings of works by Black makers are still far too few. This selection represents our institutional aspiration and commitment to genuine inclusion, and to centering Black creativity, scholarship, and lives in our programs.

Curated by Jessica D. Brier, Deknatel Curatorial Fellow in Photography, this exhibition is currently being held in the Hoene Hoy Photography Gallery, Fall 2020. 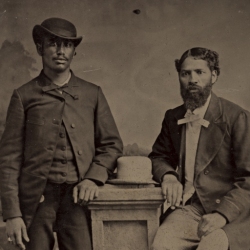 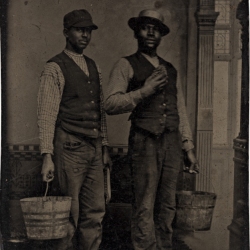 In the mid-nineteenth century, photography was instrumental to the abolitionist movement in the United States. Black photographers such as Augustus Washington and James Presley Ball established portrait studios, making Black subjects newly visible during Reconstruction. Though their maker is unknown, these Reconstruction-era portraits attest to the use of photography for the self-presentation and self-composition of Black Americans. The two subjects—most likely formerly enslaved men—present themselves as individuals. Their frontal gazes affirm their humanity, insisting on the viewer’s recognition. Their stances are likely also a byproduct of the chemical constraints of early photographic portraiture. These photographs are tintypes, a popular early photographic process of fixing images as direct positives on thin, chemically-treated sheets of metal. The exposure of a tintype took several minutes, so subjects usually held onto inert objects or architecture in order to stay still enough to avoid a blurry exposure. 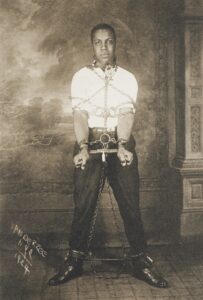 Despite the challenges of maintaining a commercial practice as a Black photographer, James Van Der Zee operated portrait studios in Harlem between 1916 and 1969. His photographs are among the most enduring portraits of prominent figures and everyday life during the Harlem Renaissance. In the portrait on view, a Black escape artist poses for the camera in Van Der Zee’s studio. The magician’s confrontational gaze and stance underscore the photograph’s visual double meaning: Though this man is shackled of his own free will, the chains that constrict his body from head to toe are not unlike those used by White Americans to bind enslaved men. The escape artist, like Van Der Zee, is scarcely a generation away from the conditions of chattel slavery in the United States. He is captured both by the shackles on his body and by the medium of photography, his image fixed by Van Der Zee at the moment of self-liberation. 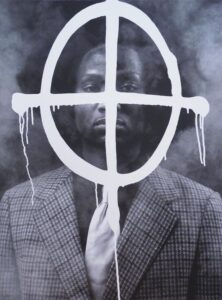 Though they were made nearly a century apart, the composition of Van Der Zee’s photograph rhymes visually with the work on view by Rashid Johnson. Johnson has layered materials, images, and references to create a portrait of Black American resistance to brutality and injustice. Johnson applied spray paint to a photograph of a model representing Thurgood Marshall (1908–1993), the first Black Supreme Court Justice of the United States. The spray paint puts a literal target on Marshall, its form referencing the logo of the hip-hop group, Public Enemy. Johnson’s title samples their song, “Black Steel in the Hour of Chaos,” released as a single in 1989. Both the song and Johnson’s portrait memorialize the ongoing criminalization of Black activism despite the incremental victories of the American Civil Rights movement. 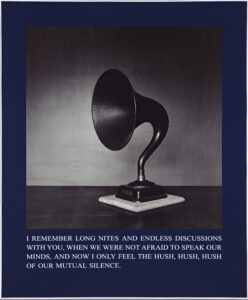 Carrie Mae Weems and Arnold Joseph Kemp both explore the representation of an absent self through text and inanimate objects. In the photograph by Weems, the image of a Victrola is accompanied by a conversational yet ambiguous caption. The meaning of this pairing is oxymoronic: The Victrola is an early twentieth-century object that enabled the mechanized amplification of sound, while the text refers to the silencing of a dialogue between two absent parties, referred to as “you” and “I.” The silent Victrola looks like an absent human figure, composed and cropped like a typical photographic portrait. It is further anthropomorphized by the words below it. The work demonstrates how the meanings of images and text can shift in relation to each other, and suggests the mutual understanding that can emerge from discourse between people.

Kemp’s photographs similarly suggest inanimate objects as surrogates for human subjects. Each photograph pictures a book in the artist’s hands, evoking the intimate connection between individuals and the objects that surround us. The artist is simultaneously absent and present in these photographs. His prolific career as a visual artist, educator, curator, and writer is represented by the accumulation of literature that has shaped his thinking. The photographed books are assembled as a visual bibliography—suggested as incomplete and tentative by the portfolio’s title—which centers Black art and visual culture, including titles by Toni Morrison, James Baldwin, Wanda Coleman, Hilton Als, Aimé Césaire, and Robert Farris Thompson. The portfolio is an alternative representation of art history as an expanded, reconsidered, and recuperated field. 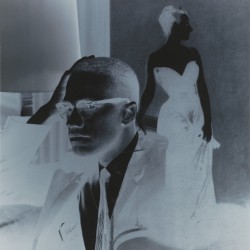 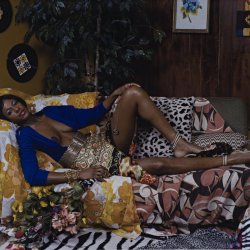 Both of these works by Fred Wilson and Mickalene Thomas appropriate aspects of the White-dominated art historical canon to evoke the empowerment of Black subjects. Wilson is an interdisciplinary artist best known for interrogating the colonialist systems embedded in Western art history and museums. His double-portrait combines reproductions of a photograph of Malcolm X, taken at a 1964 press conference for Martin Luther King Jr., and John Singer Sargent’s painting of the Parisian socialite Madame Gatreau (also known as Madame X) from 1884. Madame X appears to stand behind Malcolm X, her hand resting casually on his shoulder. Wilson emphasizes the unlikeliness of this witty juxtaposition by manipulating photography’s positive-negative reversal. By leveling the difference between the two subjects’ skin tones, Wilson calls attention to the difficulty of representing Black skin in black-and-white photography. He suggests that the emancipation of the Western art historical canon is as undeveloped as this photograph appears.

Thomas borrows the composition of the “odalisque”—a common trope of nineteenth- and twentieth-century European painting. She upends the orientalist practice of depicting the submissive female bodies of an exoticized “other” as objects of White male desire by staging portraits of Black women who own and embody their sexuality. Through careful staging and working with models to craft poses and scenes, Thomas creates celebratory expressions of queer, female, Black subjectivity. Like the vintage patterns that surround her, this model’s powerful gaze welcomes the viewer’s attention. The colorful textiles reference a Black aesthetic of the 1970s, an era that saw the rise of the Black Arts and Black Power movements in the United States. Thomas extends those efforts to empower and uplift Black culture into the contemporary moment. 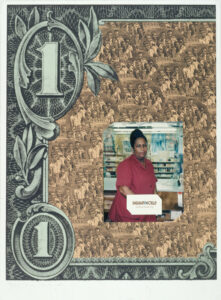 Jamaican-American artist Nari Ward frequently mines his own background as an immigrant to the United States to examine racial and economic disparity by combining found objects. In this print, a snapshot of a woman and a business card from a dollar store are superimposed against an enlarged U.S. dollar bill. The layered image tells the story of a woman named Lorraine, an immigrant working at a dollar store, whose image once appeared on Jamaican bank notes. Lorraine represents the experiences of discrimination and economic hardship of many immigrants to the United States who are often forced into menial jobs below their expertise and skill, leaving behind prestigious careers and social status. The placement of Lorraine’s image on the one-dollar bill calls attention to the exclusive representation of White men on U.S. currency. Ward asks us to imagine what it would look like for the United States to honor Black Americans, both past and present, who have built much of this country’s wealth while amassing so little of it.